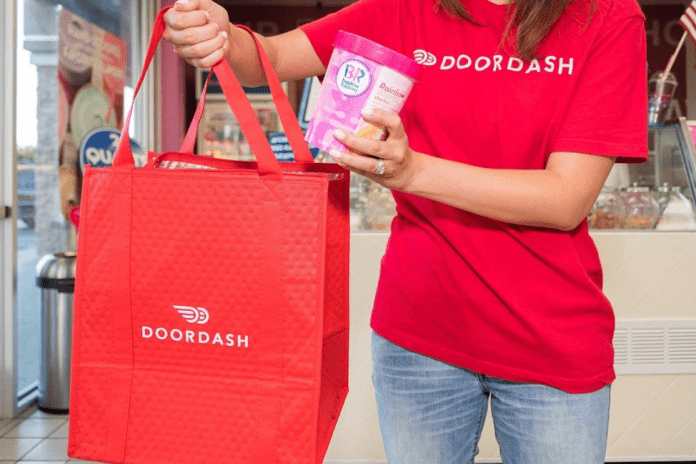 DoorDash wants to follow their lead. The food delivery company originally priced their initial shares around $75, and now they’re up at $102 per share. Investors are anxiously waiting for this debut and although this isn’t the official pricing yet, if they do open the gates at this price, DoorDash will be worth around $32 billion.

That basically doubles the company’s original valuation (pre-IPO) of $16 billion which they set over summer. DoorDash was smart in raising more money during a huge period of growth for the company, which let them stash away more cash in their reserves before IPO-ing and do so with a small dilution.

Watch out Uber Eats and whatever lil’ food delivery apps there are out there. DoorDash is wellllllll prepared to take them all on, especially with this price above the range it raised cash in and a fat savings in tow. We’ll have to keep an eye on how they use that cash to drive gains and, who knows, acquire some of these other delivery companies next year.

Side note: how many damn IPOs can we fit in this year!? It’s been one for the books. What do you think has been the most exciting IPO this year and why? Hit reply and tell us!

Cybersecurity Is Basically a Joke

Life is looking pretty grim for ya if you’re a cybersecurity company like FireEye. Yesterday, the company was hacked by (what they’re calling) “a nation with top-tier offensive capabilities” who… get this, stole the company’s own hacking tools.

And supposedly they’re one of the world’s leading cybersecurity firms? K…

True, FireEye (who’s worth $3.5 billion) has been the leader in fighting cybercrime, working with intelligence agencies, government agencies, and so on.

Kevin Mandia, FireEye’s CEO, wrote an in depth blog post about it. He said, “The attack is different from the tens of thousands of incidents we have responded to throughout the years,” and that “they operated using methods that counter security tools and forensic information.”

The FBI and Microsoft are running to FireEye’s rescue to help investigate the attack. Of course the evidence they have so far is pointing fingers to Russian-backed hackers (did we need evidence for that…).

The hackers were able to steam FireEye’s “Red Team” tools and in defense, FireEye has posted other tools on GitHub to counteract any hacking measures that take place against customers.

Let’s see if FireEye can get their sh*t together and not let “Russian-backed hackers” hack into all the customers they serve. We’ll keep you posted.

Fire in the Hole

Or… fire in your bank account. Doesn’t sound good, does it? Well, FIRE, which actually stands for “Financial Independence, Retire Early” is a movement particularly popular among millennials that advocates for someone to save aggressively and early. By aggressive we’re talking 50-70% of your total income into a low-cost index fund. The intention is to draw only 4% (yes, only 4%) from that fund once you retire. The most common goal from FIRE walkers is 25 times their annual expenses.

The problem with the FIRE movement is those that are teaching or blogging about it haven’t been very diverse. It’s pretty much across the board white males who have six-figure salaries, so their content is hard to grasp for those who don’t have that same income or expense budget.

Now, there’s a movement (on top of the movement) that was started by Kiersten and Julien Saunders, bloggers at Rich & Regular. The Black couple are debt-free, full time entrepreneurs who will hit their target goal of $1.5 million saved by 2021 and no plans in sight for retirement (yet).

They’re teaching the Black community how to use FIRE to create generational wealth. As is Athena Valentine, who does the same for the Latino community. Of course with that comes different teachings on how to pursue entrepreneurship as a means to diversify your income streams and up that savings goal. Valentine got started with the FIRE movement after a health scare, not necessarily just a goal to have a massive amount of cash stacked away when she retires.

The nice thing about FIRE is it doesn’t just teach people frugality, it teaches people how to start businesses, diversify their income streams, time management when still working a 9-5 and building online and how to get debt-free fast, or, y’know, be prepared when sh*t like COVID-19 takes over the world.

Have you ever taken part of a radical movement to get debt-free, save, or diversify income as an entrepreneur? Hit reply and tell us about it!