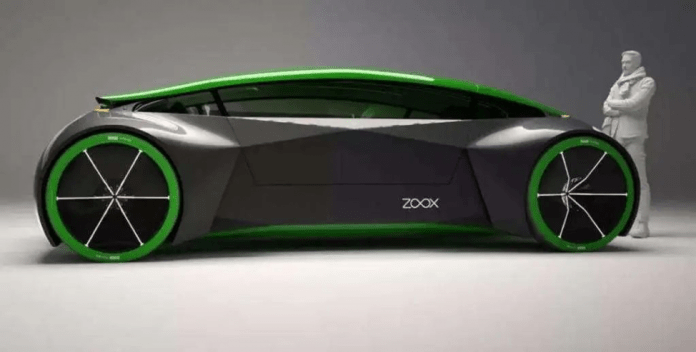 All those EV cars and companies with driverless taxis are about to get crushed. Watch out Waymo and GM, Amazon just released their first autonomous taxi vehicle yesterday from their company Zoox.

Zoox specifically made the car for tiny AF streets and it even has the ability to steer with all four wheels. Charging won’t be a problem because the car can go nonstop for 16 hours.

The car is styled to fit four passengers with each of them facing each other (think British taxis or “carriage style” as they’re calling it).

What happens if the car goes the wrong direction or starts running red lights like a madman? Well, passengers can’t save the ride since the car doesn’t have a steering wheel.

It was certainly designed for major cities and populated, urban areas, especially because it’s smaller than a Mini Cooper! Uh, do they know how big Americans are…?

The vehicle is equipped with cameras mounted to all four corners to “eliminate typical blind spots” and gives an almost 360 degree view from each corner. Almost.

It looks like the ride-hailing service won’t start in 2021, although they’re testing cars right now in San Francisco, Foster City and Las Vegas. The only thing GM’s Cruise has above the Zoox (so far) is it’s made to fit six people instead of four.

The lattes run about $28 for a bag of powdered concoctions with superfoods in them. Meghan tried the products a few years ago and reached out to the company herself for potential investment opportunities.

Part of Meghan’s push to invest includes the fact that CEO Hannah Mendoza is a woman. Not only that, Hannah’s focused on using ethical ingredients for her products in an attempt to be #ontrend and with a focus on wellness.

Thanks to Megan and her big ole celeb status, Oprah has endorsed the company on her Instagram. It pays to have famous people send your products to other famous people. You can’t beat an endorsement from Oprah.

These Boots Were Made for Kicking Competitor’s A**

Thursday Boots is a small business started in 2014 that offers DTC leather “Americana-influenced” boots. Considering the boot industry is filled with old (I mean oldddd) standby companies with large reputations, Nolan Walsh and Connor Wislon, cofounders, were in for a treat.

Their focus has been on building quality and in order to compete with the big guns, er, big boots, they have made some of the most minute improvements to details that are hard to notice, but important to wear and tear, design, and so on.

One of the biggest problems with boot makers is their “we’ve been doing this for decades, we don’t need improvement” mentality. Which is exactly where Thursday Boots saw their opportunity. They became experts in creating affordable, quality boots and identified all areas for improvement where boot makers weren’t looking.

The other thing they do is listen to their customer feedback relentlessly. The only funding they had was their own $20,000 of bootstrapped cash and $276,000 from a Kickstarter campaign that gave them more feedback than they knew what to do with.

Seeing that quality was the most important, that’s what they invested the most in. Quality materials, taking their time to perfect their boot style and development process, and making sure they created relationships that last with their customers. Still to this day most of their business comes from word-of-mouth and as a business owner, when you’ve got WOM, you know your product is gold.