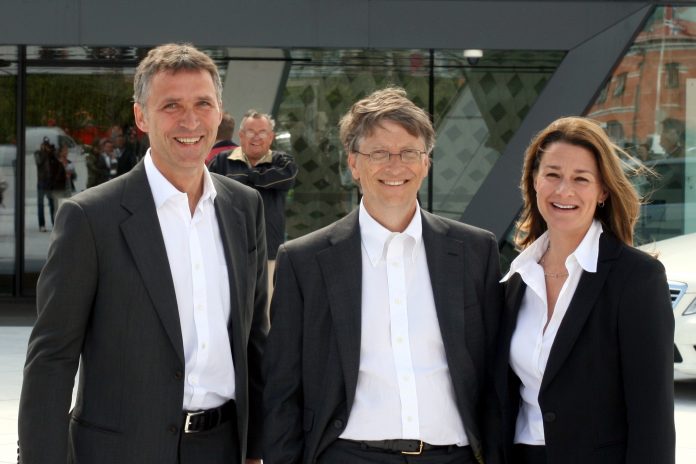 Ever heard of the Giving Pledge? It’s a movement started by Bill and Melinda Gates and Warren Buffett. The point basically is anyone who signs the pledge agrees to give most of their millions and billions away.

So far, among others, Billionaire Rich Barton, Zillow’s CEO and co-founder, Ron Conway, Silicon Valley’s “super angel” investor, Jeff Rothschild, one of Facebook’s earliest employees, and Stephen Schwartzman, CEO of Blackstone, all signed away a combined net worth of $40 billion. Paul Allen, Microsoft’s co-founder, Marc Benioff, Salesforce’s CEO, and Mark Zuckerberg, CEO of Facebook all have signed the pledge as well.

Wondering why other rich AF individuals haven’t signed? This is a strictly billionaires-only club. The Pledge was founded in 2010 as a “movement of philanthropists who commit to giving the majority of their wealth to philanthropy or charitable causes, either during their lifetimes or in their wills.

Some people aren’t happy enough with the signers, however, because many are much, much richer than they were when they signed. Raking it in faster than they’re giving it away perhaps? Let’s take into consideration, however, the pledge doesn’t take into account donations.

Bezos still hasn’t signed. He’s one of the top five richest people in the world and the only one to not pledge it all away… yet. Even his ex-wife, Mackenzie Scott, has signed and even donated over $4 billion this year to help people hit hard by the pandemic.

Who do you think should sign the pledge next? Hit reply and let us know!

Chobani, the Greek-style yogurt company, was started by Hamdi Ulukaya 15 years ago when he bought an abandoned dairy factory. Now, the privately held company rakes in about $1.5 billion in ARR, but only does so with good business in mind. Ulukaya started the business inspired by his upbringing in Turkey where, no matter if you were rich or poor, yogurt was a common ground on everyone’s table. He noticed there wasn’t Greek-style yogurt to be found anywhere in NYC and decided to make it himself.

Chobani wants to help save dairy farms. Dairy farmers have been dying off right and left in the US, for a long time, which is why Chobani started Milk Matters in 2019. It’s a coalition with fair trade companies, universities, and farms to try and design “tomorrow’s farms and farm conditions”.

Hamdi is most well-known for his “anti-CEO” way of life. He believes in being a leader who puts nobility and his employees first, above all else. The pandemic has just furthered this for him and many other companies who realize how important their employees are.

30% of Chobani’s employees are refugees and immigrants and Hamdi’s message for all other business owners is to hire more refugees. Chobani’s coalition connects 140 large organizations worldwide who are all trying to help the millions of refugees that are just looking for an opportunity, any opportunity, to be a part of something and grow their lives.

Chobani has also partnered with many food banks this year due to the increase in food-insecure families. The company also has a Chobani Incubator to help food startups and food entrepreneurs understand the fundamentals and operations of running this type of business.

In what ways is your company looking to help out a cause or give back to its employees? Hit reply and let us know!

Gabby Goodwin, CEO of Confidence by Gabby Goodwin, is only 13 years old and taking the Black haircare community by storm. Especially during COVID-19, haircare products for Black girls and women have been very limited, which is what inspired Gabby’s plant-based line.

Gabby wanted to help Black women love their natural hair and release the stigmas they may have around it. Her business started as a barrette line when she was six years old, and then morphed into hair care products that are made in Atlanta.

She did hit some roadblocks when COVID-19 hit because she had major trade shows and expos booked to sell her products. But, like a good entrepreneur, Gabby saw the opportunity to sell even more products since hair salons were shut down. She created a bundle offer with all of her haircare products and called it an “at-home system”. After that, sales were pouring in.

Little Ms. Goodwin and her Confidence by Gabby Goodwin company “have had the best months that we’ve ever had during the six months in the pandemic,” and reminds us that “a small pivot can make the biggest difference.”

Do you know of any children that have created a successful and innovative product or business pivot since the pandemic? Hit reply and share with us!

Alternus Energy harnesses the power of the sun to play a leading role in...