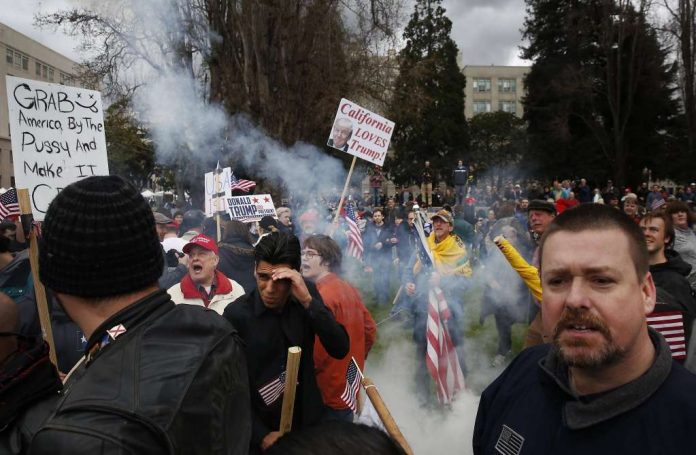 Or rather “Stop The Steal” protestors went crazy. Unfortunately, it’s no laughing matter as at least four people who were shot during the chaos that took place inside the Capitol have died and several others were injured.

Shortly after President Donald Trump’s speech yesterday in Washington DC supporters went to express their outrage and breached the Capitol Building. The building was completely occupied at one point and members of Congress, who were going over a disagreement regarding 2020’s election results and the electoral college votes, were put into lockdown in an attempt to keep them safe.

The Capitol was secured a few hours later and after several pipe bombs were recovered. The Senate and House were able to reconvene after the violence subsided and the Capitol was cleared, with the FBI hoping to identify some of the violence instigators. Mayor Muriel Bowser of Washington DC put an emergency curfew in place for the next 15 days, until after president-elect Joe Biden is inaugurated.

We’ll surely see more protests until then and after, but hopefully none as violent as yesterday. What are your thoughts? Hit reply and share.

Does the NYSE Know What They Want?

So, uh… looks like there’s been a double reversal on the New York Stock Exchange’s decision to delist the three major telecom Chinese companies.

To catch you up to speed… the NYSE announced last week they’d be delisting three China-based companies from the exchange. They then reversed that decision on Monday, only to delist them once again yesterday.

It looks like the stock exchange has just been responding to the Trump administration’s order to ban anyone in the US to invest in companies supporting China’s military (hence the whole TikTok/ByteDance saga).

In the NYSE’s defense, their first reversal was because they wanted to let the telecom companies keep trading while they evaluated the executive order. Looks like that evaluation came fast and China Unicom, China Telecom and China Mobile are getting the boot from the exchange as of Monday, January 11th at 4 am Eastern time.

This shows the importance of this executive order because the volume of these telecom company’s trading on the exchange is an extremely small percentage.

Twitter’s Getting Into the Podcast Game

Twitter is trying to break into the audio or podcasting game, much like Amazon, which bought Wondry last week. They just bought the social podcasting app called Breaker to integrate with their current platform.

Clearly, we’re falling more and more in love with audio each day. In 2020, podcast listeners around the globe were at about 1 billion people. That’s compared to only 287 million in 2016. Plus, if we’re talking about those looking to pivot their career, anyone in the music industry can make waaaaay more cash from podcasts than their songs. For one, there’s no record label to give a cut.

Spotify has bought into podcasts big time, spending over $700 million since 2018 to purchase companies like Parcast and The Ringer, while Apple (the podcast originator) has doubled the number of podcasts it hosts in the past two years.

The cool thing about Breaker is that you can follow your friends and leave comments on episodes, which hopefully is a feature Twitter will bring over to their platform. Breaker is going bye-bye, but their staff and tech crew are coming over to Twitter. They’re even starting (what Twitter is calling) “an audio-based social project called Twitter Spaces”. AKA a podcast. Just call it what it is Twitter.

Podcasting, although it’s seen a major rise in popularity, needs to evolve. With so many audiences connected to each podcast, you’d think podcasters would want a way to have a two-way conversation or at least get feedback (rather than praying for listeners to subscribe to their email list). Ad sales will probably increase too because there’s going to be an added element of social targeting from Twitter that Breaker and other podcasts don’t normally have.

Are you a podcast listener or podcast host? Hit reply and tell us!