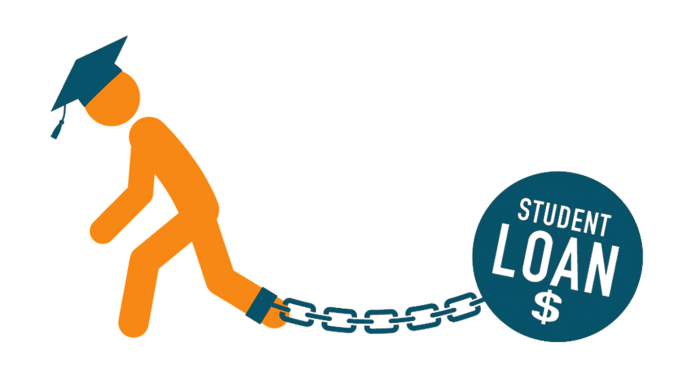 Entrepreneurs like Erika Kullberg (former Georgetown Law student) have struggled to make their businesses succeed when they’re faced with the option of a high paying job opportunity that would alleviate student debt. Erika started ReferU with her former classmate Jimmy McNamara while they were still attending Law School in 2015. The company offered a social component for individuals just moving into apartment buildings.

They did their duties of all small businesses trying to get business, gained interns, and got a lot of attention from angel investors. But unfortunately, Kullberg had to make the tough decision one year later of taking a high-paying job offer at an international law firm or keeping her business growing. She decided on the former primarily because she had $200,000 in debt hanging over her head.

Kullberg says, “I really wanted to pursue the startup, but student loans are handcuffs.”

Startups drive almost all job creation these days, but yet it’s difficult for young founders to succeed considering the US has $1.7 trillion in student debt. If you don’t have a lot of cash available as a startup founder (who does?) and have a ton of student debt to pay, which decreases your credit score, then business loans are almost possible to get.

Plus, that debt often carries into a graduate’s life well into their 40s. So what, then you’re supposed to start your business idea?

The CARES Act has attempted to address this issue which might also help unemployment rates. We don’t want to see the same fallout happen to startups like we did in 2008. There are other programs like the CAE’s Entrepreneurship, Growth and Opportunity Act that helps founders consolidate their debt and forgive any remaining debt to those that have paid $12,000 or more in five years.

Thankfully, Kullberg has started another business after getting rid of almost $225,000 in debt in just two years. The business is called Plug and Law which offers legal document templates for small business owners.

What do you think the solution should be for startups who carry student debt? Hit reply and tell us!

From Introvert to Extrovert

Just like most software engineers-turned-startup-founders, David Cancel thought that when he started his business, he could spend all his time doing what he loved: building software and coding.

He was wrong, primarily because he spent a lot of time focused on people management. And not because he had to, but because he wanted to. It was reading the book, The Autobiography of Andrew Carnegie that inspired Cancel to understand the needs of his people.

Carnegie wrote in his book that, “people [are] the impossible part” and that until you understand what “your people’s” needs are, what makes them tick and what makes them act, you might always struggle in business.

Carnegie also suggests understanding how your employees and customers want to be communicated to, how do they operate under stress, and what drives their decisions.

This focus helped Cancel create a customer-centric business model and train his engineers to measure their work not by meeting deadlines, but by the quality of their product.

Are you an Andrew Carnegie fan? Hit reply and tell us what you think about this!

It’s Time to Let Go of Your Old Phone

We know you have a stash of old cell phones hidden somewhere. Or even worse, that you’ve been guilty of simply throwing one or two away before (we’ve all done it). Redwood Materials is saving the day when it comes to recycling your old electronics that, if thrown away, are extremely damaging to the environment.

JB Straubel, former CTO for Tesla, opened up the company at first helping corporate customers like Amazon and Panasonic recycle consumer electronics and battery cell production scraps. It wasn’t until last October that Straubel begun hinting at the idea of letting consumers recycle with them as well.

Even better, the company isn’t super strict on what you can and cannot send. They’ll even take old cables. There’s no formal shipping process yet, but that’s coming shortly in the future.

By collecting these old electronic scraps, the company processes and discards the goods, while extracting lithium, nickel and cobalt, materials that are usually mined. They then send those materials back to the company (like Amazon or Panasonic) that they came from. How consumers play into that aspect, we aren’t sure yet.

What other great recycling initiatives have you seen pop up in the last year? Hit reply and share with us!